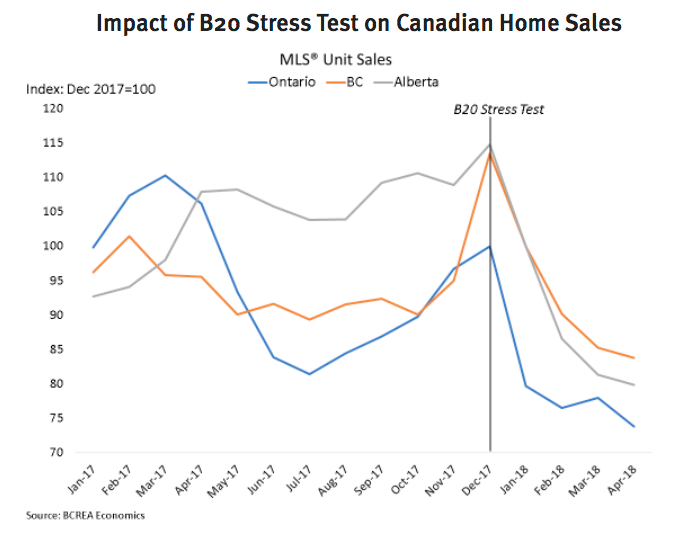 The Canadian mortgage market has seen substantial changes in the first six months of 2018, with mortgage credit both more expensive and more difficult to access. The B20 stress test for conventional borrowers has slowed overall mortgage credit growth while the five-year qualifying rate for Canadian mortgages has gone up 70 basis points in the past year. Rising mortgage rates have largely been influenced by tighter monetary policy from the Bank of Canada as strong economic growth has fueled rising inflation.

It has been quite some time since Canada was in a true rising interest rate environment. The last cycle of prolonged rate increases was from 2004 to 2007, just prior to the global financial crisis when the Bank of Canada increased its overnight policy rate ten times over three years. Much about the Canadian economy has changed since that time, and those changes have had substantial implications for the ultimate destination of Canadian interest rates. The Canadian workforce has aged, lowering the growth rate of the Canadian labour force. Further, the sharp decline in commodity prices has meant a scaling back in oil-sector capital investment and subsequent lower productivity growth. Both of these factors have translated into a lower potential or long-run rate of economic growth in Canada. That potential growth, in turn, influences the long-run level of interest rates that the Bank of Canada would like to return to once the economy is at full capacity and inflation is at its 2 per cent target. Ultimately, a lower potential growth rate means lower interest rates in the long-run. The Bank of Canada estimates the long-run level of its policy rate at 3 to 3.5 per cent.

Based on historical averages of interest rate spreads, that implies that the five-year qualifying rate would equal between 6 and 6.5 per cent once the Bank of Canada closes the gap between the overnight rate and the Bank’s long-run or equilibrium overnight rate. Based on our outlook for Canadian economic growth and inflation, it is likely we will see the five-year qualifying rate near that destination by the end of 2020.

It was a disappointing start to the year for the Canadian economy as first-quarter growth came in at just 1.3 per cent, well below the consensus forecast of 2 per cent. Much of the observed weakness can be traced back to the impact of newly implemented mortgage stress tests, which force conventional mortgage borrowers, including those with more than 20 per cent down payment, to qualify at the greater of the five-year fixed qualifying rate or their own contract rate plus 2 per cent. These more stringent qualifying requirements have eroded as much as 20 per cent of would-be buyers’ purchasing power. Not surprisingly, that policy has blunted housing activity across Canada.

If the impact of the stress test evolves in a similar fashion to past macroprudential tightening, we expect that home sales and the wider Canadian economy will rebound in the second half of the year. Our forecast is for Canadian real GDP growth to accelerate over the next three quarters, registering 2.3 per cent for 2018 and 2.0 per cent in 2019. Above-trend economic growth will continue to put pressure on core inflation, which we forecast will rise slightly above 2 per cent over the next year.

Although the Bank chose to hold its policy rate steady at its May 30 meeting, it did strongly signal that rates are heading higher and soon. To understand why, it is worth reviewing how central banks think about monetary policy. Most central banks set interest rates such that inflation stays at or near its target, which is 2 percent for the Bank of Canada, and the economy runs neither too hot nor too cold. The Bank of Canada measures the temperature of the economy based on the output gap, or the difference between actual real GDP and its estimate of the economy’s potential or long-run trend level.

If, as is the case now, that inflation is at target and the economy has returned to its long-run trend, the Bank endeavors to return interest rates back to their long-run or equilibrium level. Given the current policy rate of 1.25 per cent, there is currently a 200-basis point gap between the Bank’s policy rate and the Bank’s preferred long-run level.

However, US trade policy remains a wildcard that may interfere with the Bank’s best-laid plans. With a normally functioning international trade negotiation, we would expect the Bank to raise its overnight rate at least one more time this year, possibly as soon as its July meeting. However, the potentially negative economic impact of new tariffs or other trade disruptions could very well delay further rate hikes this year.

What is the Impact for the Future Real Estate Buyer?

In the short term, it looks like we are only set to see a modest rise in interest rates, but over the longer term, towards 2020, there is a forecasted increase of .56% in the qualifying rate.

So for those who are planning to buy in the next couple of years, and are going to find qualifying 'tight',  it's best to have a chat with your Mortgage Broker now and make sure you are doing the right things to prepare yourself.

Of course, there is a lot that can happen before then!

BCREA makes no guarantees as to the accuracy or completeness of this information.